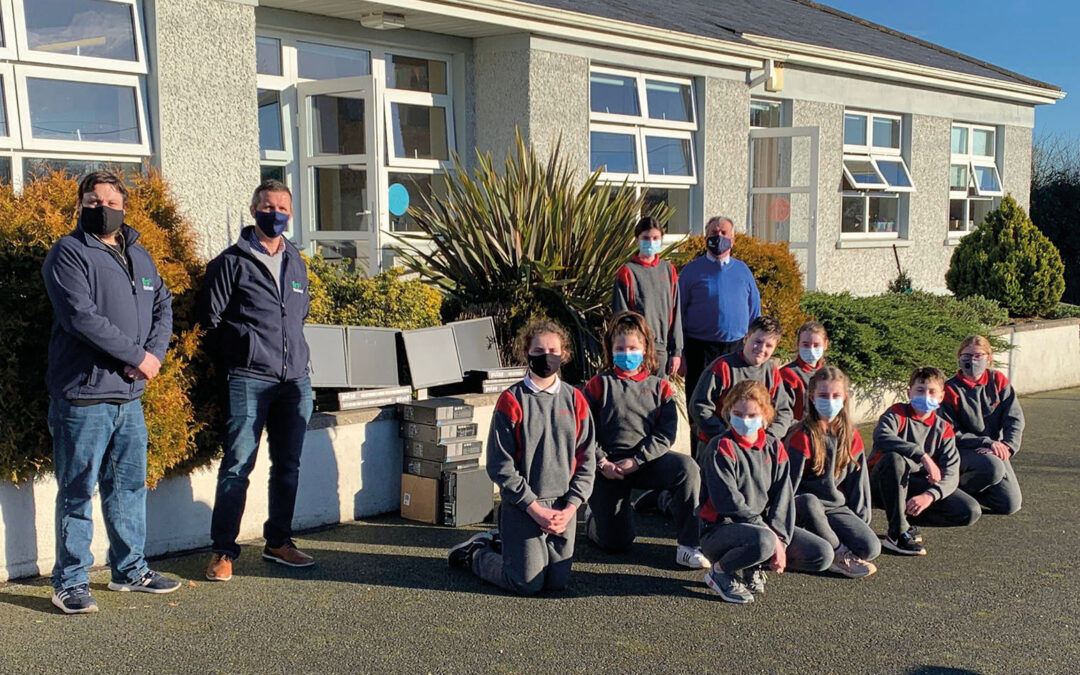 Scott Kemp and Mark Moroney (on left) and Tim Maher, Vice-Chairman of FRS Network pictured with students from Clonlisk N.S. when they delivered a donation of PCs to the school.

19 Schools in Tipperary, Laois, Offaly, Kerry, and Clare are enjoying new computers thanks to the commitment of FRS Network to supporting local communities.

In March 2020, the FRS I.T. Team were faced with a massive challenge when a nationwide lockdown began, and most FRS employees moved to work from home. As a consequence, a large amount of desktop computers had to be replaced with less cumbersome laptops.

Although the PCs could be sold, the selling value did not reflect the worth of the computers and the IT Team felt that donating them to schools would be a far more worthwhile endeavour.

The team approached management to ask if this was possible. Peter Byrne, retired Group CEO of FRS Network and Colin Donnery, new Group CEO of FRS Network, not only agreed to the donation of the computers but went even further and committed to maximise the resources for schools by funding all the peripheral equipment at a cost of €10,000.

There was a lot of work involved in this project. The computers had to be collected from Turas Nua and FRS offices all over the country. Once back in Roscrea, the team replaced the hard discs with new ones and installed Windows 10 operating systems. Each computer was then equipped with a monitor, keyboard and mouse and was Wi-Fi enabled.

Staff and students alike were surprised and delighted with the delivery of the PCs and expressed their thanks to FRS Network.

‘Thank you so much for donating PCs to the school, we are absolutely thrilled with them and know they will greatly benefit the children’s learning experiences in all areas of the curriculum.’ – Simone Mitchell, Principal, Dunkerrin N.S.

‘It is amazing to get these computers, they will help us so much and help us learn a lot’-  Aoife, Moneygall N.S.

“Having the computer in the classroom and access to the internet and digital technologies develops the digital skills of the children and broadens their development opportunities.  The children are practising their typing skills and researching articles for projects at the moment.  Thank you so much for the donations! “- Mr. Brendan Hanamy, Principal, Scoil Chronain Naofa, Dromakeenan, Roscrea

The FRS IT Team did all this work in their own time and credit must be given to Mark Moroney, Ray Phelan, Scott Kemp, David Mulrooney, Kevin Timmons, Jamie O’Sullivan and Ros Quinn for giving so much of their time and expertise and who are delighted with the positive feedback from the schools.