Peter Byrne to Retire as CEO of FRS Network Next Year 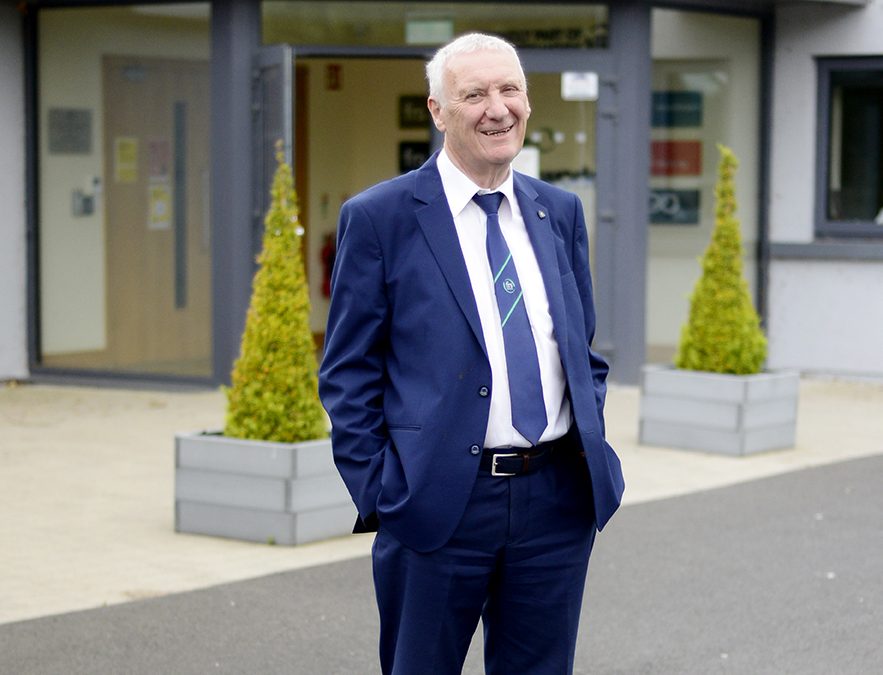 After over 40 years at the Helm, our CEO of FRS Network, Peter Byrne, is to retire early next year.

With Peter serving as the first manager, the National Co-Op Farm Relief Service (NCFRS) organisation was established in 1980 as the umbrella body for FRS Co-ops. Before taking up that role he had worked with Macra na Feirme, where he had been tasked with researching the development of FRS.

He has remained at the helm of FRS ever since, as the organisation has grown exponentially while broadening its reach into a range of diverse markets under the management of FRS Network.

FRS Network is active all across Ireland and incorporates a range of business units which employ approximately 2,000 staff, with an annual turnover of circa €100 million. These businesses include FRS Farm Relief, FRS Fencing, FRS Recruitment, FRS Training, Herdwatch, Turas Nua, FRS Business Services, FRS Employability and most recently, Get the Shifts.

Some of the key achievements during Peter’s 40+ year time at the helm of FRS Network include:
• Creating the newly formed National Co-Op Farm Relief Services (NCFRS) in 1980 which brought structure and support to the FRS Co-ops around the country.
• Bringing together relief milking groups in the early 1980s to form 32 FRS Co-ops and subsequently driving their amalgamation. This process would eventually lead to the consolidation of 14 FRS Co-ops into one entity, NCFRS.
• Bringing the then pioneering services of hoof care to Irish farmers in 1981, scanning in 1983, farmer sickness and accident support in 1984 and farm plastic recycling services in 1996.
• Progressing the development and diversification of the services provided by the organisation to ensure it is active in a range of aligned and rewarding markets including farming, fencing, recruitment, employment services and innovative farming technology.
• Identifying and implementing strategic business opportunities for the business which meet customer and community needs all across Ireland.
• Developing the various national contracts in conjunction with the Department of Agriculture Food and Marine (DAFM), Department of Employment Affairs and Social Protection (DEASP) and agri-organisations such as FBD Insurance, Teagasc and Bord Bia.
Originally from Roscrea in Co. Tipperary, Peter is married to Joan, and they have seven children.

Speaking about Peter’s decision to retire, NCFRS Chairman Francis Fitzgerald said, “Peter has been a giant figure in Irish agriculture, business and enterprise. The impact he has had is there for all to see in the size and scope of FRS Network today. When you consider that this organisation grew from such humble roots in 1980 to become a social enterprise which now interacts with thousands of customers all over Ireland on a daily basis and which employs more than 2,000 members of staff, you can get some sense of what Peter has achieved. However that is really just the tip of the iceberg when it comes to his accomplishments.

“Peter has been a visionary leader. He saw needs before anyone else and he sought out solutions to address them. He saw strategic opportunities for how the business could grow and he made smart decisions that allowed FRS to broaden our business and services. We simply wouldn’t be the organisation we are today without Peter’s far sighted outlook and brilliant guidance.

“The task now turns to finding someone who can take on this role and fill Peter’s sizeable shoes. We have implemented a recruitment process and we hope to be in a position to announce Peter’s successor in the near future. We are grateful that Peter will work with the incoming CEO to help them settle into the role. We will announce further details as soon as the process is complete,” Mr. Fitzgerald concluded.

“The development of FRS Network has been my life’s work,” said Peter Byrne, CEO of FRS Network. “It has been my immense pleasure to work with this organisation and to see it blossom over the years. The FRS Network team continue to amaze me on a daily basis and it has been an honour to work with so many smart, talented colleagues and friends. After more than 40 years’ of service, now seems like the right time to hand over the reins. I look forward to working with my successor as soon as that individual has been appointed and I will continue to be available to both the new CEO and the board to ensure a seamless transition in the months ahead,” Mr. Byrne concluded.

The board of FRS Network has begun a recruitment process with a view to a new CEO being appointed in the coming months to facilitate a seamless transition in Q1 2022.